The Pearland Police Officers Association Fraternal Order of Police Lodge 119 (Pearland POA FOP 119) as we know it was formed on October 12th, 1987 and was initially called the Pearland Police Patrolman’s Union and at the suggestion of the 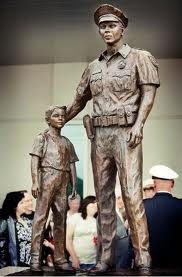 Assistant City Manager, Union was changed to Association on December 30, 1987. Prior to this, in 1982 a Pearland POA FOP 119 existed and in 1982 helped to pass Civil Service in Pearland.

Prior to the mid-90s, there also existed another association, the Pearland Police Patrolman’s Union, but in the mid-90’s the Pearland POA FOP 119 and PPPU merged into a single organization. Five members attended the first meeting: Rob Harding, Matt Zepeda, Mike Johnson, Rene Alvarado, and Armando Garza. The first board elections were held on March 25, 1988 with Rob Harding elected as the First Association President. The remaining first executive board members were Mike Johnson as Secretary/Treasurer, Armando Garza as Board Position 1, and Rene Alvarado as Board Position 2. In March of 1999, the Pearland POA FOP 119 became an affiliate of the Texas Municipal Police Association (TMPA), which was established in 1950 to provide legal assistance to police officers.

A Political Action Committee was formed in 2005 under the guidance of Hersh Hoaglan. The PAC would permit the Pearland POA FOP 119 to endorse political candidates for office, as well as donate to their campaigns. The formation of the Pearland POA FOP 119-PAC took place on February 2nd 2007 and its first board members consisted of Hersh Hoaglan, Chad Randall, and Tom Moncrief.

The Pearland POA FOP 119 has heavily participated in activities and sponsorships that better the community. The first documented community outreach program hosted by the Pearland POA FOP 119 was an ID a Kid held in February of 1989. In October of 1993 member Johnny Spires made a motion to sponsor a Toys for Tots Basketball Game. This became an annual event that continues to raise funds for the local Toys for Tots program to this day. Other fundraising events have included BBQ sells, fishing tournaments. The Pearland POA FOP 119 has also sponsored more than one event bringing member families together and an event aimed at helping the community meet officers.

The first documented cash donation given by the Pearland POA FOP 119 was in August of 1996 and came in the form of $100 donated toward helping sponsor an 8th grade splash party at Independence Park. Since then, the Pearland POA FOP 119 has gone on to donate tens of thousands of dollars toward all types of community programs and events including, but not limited to, little league teams, softball teams, Cub Scouts, football teams, various sports tournaments, Project Graduation, a hockey team, BBQ Cook-off events, golf tournaments, and even a beauty pageant contestant. The Pearland POA FOP 119 has donated money toward medical expenses of not only its own members, but also outside agency police officers, as well as fellow city employees that work within other departments in the city. The Pearland POA FOP 119 has been there to help an officer who lost their residence, build a sidewalk for a disabled boy, and help cover the expenses of flying in family during the loss of an officer.

The Pearland POA FOP 119 held a special fundraiser in 2007, bringing in $11,600. This fundraiser was a BBQ plate sell at the 2007 Winterfest. The money was raised for 4-year-old Hailey Anslow who was involved in a non-vehicle accident on Christmas Day 2006 that cut off her oxygen flow and put her in a coma for seven weeks. This was the first time the Pearland POA FOP 119 put together a fund raiser for a single individual. Members visited her in the hospital and continued to maintain contact with Hailey and the family.

The Pearland POA FOP 119 has also given annual scholarships starting in 2002 to eligible students in amounts from $500 to $1,000. The name of the scholarship was changed in 2016 to The Endy Ekpanya Memorial Scholarship in memory of member Endy Ekpanya who lost his life in the line of duty in June of 2016.

The Pearland POA FOP 119 continues to work on a two-fold mission of improving working conditions for its members and improving the quality of life in the community. Today, one of the major objectives is working with the City of Pearland and other charitable organizations to fund and create an officer memorial on the northwest side of the Public Safety Building.